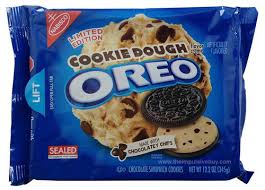 Last month, the Cookie Dough Oreo was announced. Like many cookie-dough loving, Oreo eating people, I was ecstatic. It’s basically the magical cookie you never knew you wanted, but once announced realized you always hoped for.

Going to the store became a hunt for the Cookie Dough Oreo, but to no avail. Oreo’s evil marketing campaign announced the Oreo flavor weeks before it was released. While scouring the internet for the release date, I ran across a few reviews. I was devastated to discover no one was overly fond of the new Oreo, saying that “Cookie Dough” tasted more like coffee than anything else.

So I gave up on finding and enjoying the Cookie Dough Oreo. What was the point?

A few days later, I received a text from my friend saying he had found the cookies.I didn’t want to be Negative Nelly, so I chose not to disclose what I knew about the horrible flavor. Plus, I still wanted to try them. Maybe they wouldn’t be that bad?

And they weren’t. They were pretty good, especially compared to what I was expecting. So I ate too many. Friends were not so impressed, however. Not having heard what I had about the cookies, they were disappointed.

Experience is all about perception and expectation. If you expect something to be bad, you will only see the negative. If you expect something to be good, you will only see the positive. Look at basically any political debate right now and you will see that that is true. If we try to remove expectation and remove our own biased perceptions, we achieve objectivity. This is nearly impossible as human beings, but as I go through this blog, I think that is basically my goal. I try to remove my bias and my expectations and consider the middle of an argument, and of the Cookie Dough Oreo.